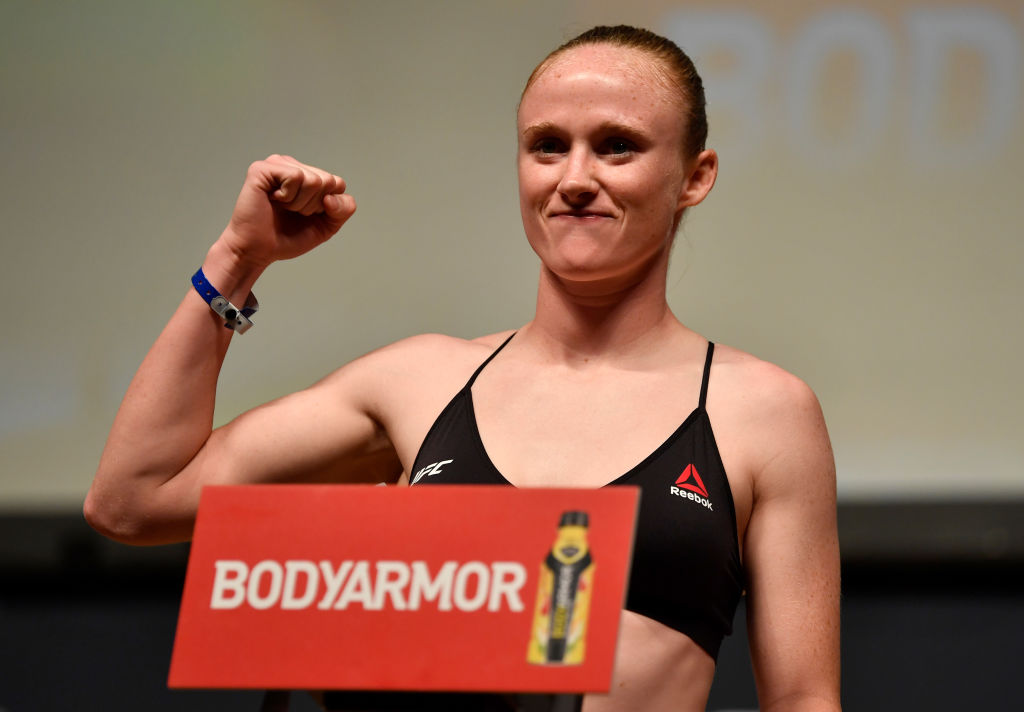 Chanmi Jeon, and the first thing she thinks about is the buzzer that let her into the building.

“I would go to work every day and I’d have to hit this loud buzzer,” she said. “And every day I’d tell myself I’m not gonna work in this warehouse, hitting this buzzer, every single day. And when I was finally able to quit and I didn’t have to go into work, it was a very proud moment.”

With good reason. It was a sign that after training in martial arts since the age of nine and fighting professionally since 2014, she had finally reached a place where MMA was going to be her full-time gig.

Now it was time for everyone else at 115 pounds to start to worry.

In her first bout as a full-time fighter, she decisioned Jeon for her first UFC win. Seven months later, she got her second Octagon victory by beating Danielle Taylor. On Saturday, she’ll try to make it three straight against Brazil’s Polyana Viana in a bout featured on the UFC 227 Pay-Per-View main card.

That’s a big deal and Aldrich knows it, but she’s not about to get distracted by the bright lights of Los Angeles.

“I don’t put any added pressure on myself because I’m on the main card but, at the same time, I’m really excited at the fact that it’s something that I’ve worked hard for and if you don’t stop and enjoy your accomplishments, then what are you doing it for? So I think it goes both ways. I’m excited, but I’m not trying to put any added pressure on it. Where we’re at doesn’t change the fight.”

It doesn’t, but the result will change where each of these fighters go during the rest of 2018 and beyond. In a division filled with veteran contenders, Aldrich and Viana have a chance to make a statement as a leader of the next generation of strawweight standouts. Aldrich knows what’s at stake, but if she can’t control what happens next, she’s not concerned about it.

“I think that we’re both really big up and comers and we both have a lot riding on this, but the fight’s the fight and it’s gonna happen the way it’s gonna happen,” she said. “I trained super hard and I know I’m ready for it. What they decide to do with either one of us after the fight is up to them. But I’m okay with climbing the ladder nice and slow.”

You don’t expect to hear that from a 25-year-old fighter. For most of her peers, the quest is to have everything yesterday. But Aldrich didn’t fall out of the sky and on to a PPV main card. She’s been in this sport for a lot of years, and she’s got a veteran’s approach to it, one enhanced after she didn’t get a call to the UFC after making it to the quarterfinals of The Ultimate Fighter 23.

“I wasn’t picked up after the show, and things happen for a reason,” she said. “It ended up being a blessing in disguise because I was able to go out and get more experience and have a few more fights and learn a little bit more before I actually did get brought into the UFC. And now look at where I’m at: I’m fighting on Pay-Per-View on one of the biggest fight cards of the year. Looking back, it’s something I know had to happen. It’s not always easy at the time, but I think I’ve always adapted. I might not have 20 fights under my belt as a professional, but I’ve been doing this since I was a kid. I know I’m still young, but I feel like a veteran out there sometimes.”

And as a young veteran, she takes an old school approach to her full-time gig in that she’s more than content to let her fists do the talking.

“Everyone thinks that the more they talk the faster they’re gonna get there, and it’s not always guaranteed,” Aldrich said. “You might open your mouth and get stuck in a situation you weren’t ready for and get exposed. I’m okay with taking the slow climb and getting there when I’m ready.”

Ewell’s Goal Is To Become The People’s Champ